Yesterday one of my colleagues started grumbling and swearing even more vociferously than usual. He had installed Adobe Flash in Firefox in order to test some changes to our website and claimed that Google Chrome had been installed as well.

"Impossible," I said. "Remember Google's motto is Don't Be Evil. They wouldn't do anything as sneaky as that."

Nonetheless, my curiosity was piqued and I googled around (oh, the irony!) to see if anyone had reported something similar. Sure enough, this immediately turned up some mozillaZine forum posts and a blog entry by an outraged German blogger. I fired up a clean Windows virtual machine, installed Firefox, headed to the Adobe Flash Update page and -- holy hound of hell! -- it turns out to be true: 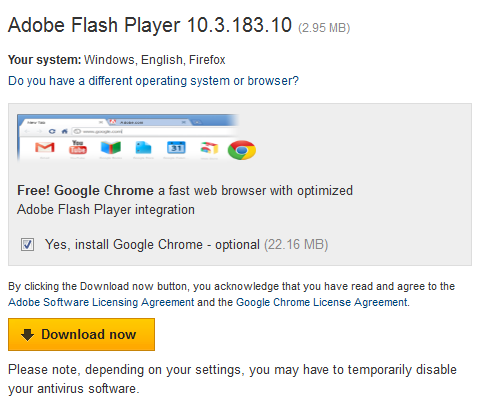 Now software bundling is a widely practiced -- if vaguely creepy -- way of distributing software, but to me this crosses an invisible line (particularly in light of Google's self-professed non-evilness). I've just installed Firefox, and the first thing Adobe does is propose to install Chrome? At very least, the link should be an opt-in rather than opt-out. (The rule of thumb I've heard is that about 80% of users download opt-out software versus 20% for opt-in.) It's a bit sad that Google is willing to go to these lengths to grow market share. And it's arguably even sadder that Adobe hasn't come up with a better way to monetize the enormous number of Flash downloads they serve.